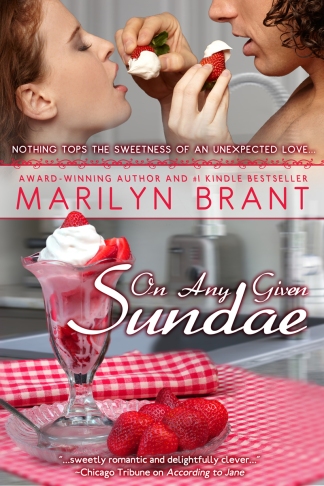 Elizabeth caught Rob staring at her again across his mother’s dinner table. He was surprisingly silent amidst the family chaos. She, meanwhile, was left to answer questions galore from Camilla, Sammie and even an occasional triplet. Dishes clattered as roasted potatoes, manicotti, grilled carrots and tossed salad with crouton cubes were passed back and forth. Hunks of bread slathered in garlic butter were distributed to the crew. Wine or soft drinks were offered. Nobody dared refuse anything.

“None of that stinking low-carb stuff for us Gabinarris,” Rob’s brother Tony whispered to her with one eyebrow cocked. They all watched as Rob and Tony’s mom, Alessandra, heaped several spoonfuls of potatoes onto little Sammie’s plate.

Alessandra stopped abruptly, ladle in the air. “What happened to my music?” She looked accusingly around the table. “Roberto, was it you?” she said.

Rob shook his head, wide-eyed but with upturned lips, and his mother’s gaze fixed on Tony.

“Oh, all right. Yes, it was me.” Tony rolled his eyes and threw his hands in the air.

His mother continued to glare at him.

“You do that, Antonio.” She set down her bowl and crossed her arms. “Fooling with my CD player,” she muttered until the strains of Madonna’s classic “Get Into the Groove” floated into the dining room. “Hmm. That’s better,” she said when Tony returned. And the clattering, clanking, chattiness and general chaos resumed again at the table.

Fifteen minutes later, Elizabeth had managed to mostly relax. The children’s queries kept her occupied and Tony’s wife tossed encouraging smiles her way. She released a deep, pent-up breath. She’d almost done it. She’d nearly made it through the meal without saying or doing anything too embarrassing, thank goodness. In another half hour she’d be able to go home.

She glanced around the lively table. The triplets were making a game of poking holes in their bread. Sammie was still hiccupping. Camilla and her mother were giggling about something they’d seen in a Disney video. Rob and Tony were in the midst of a rousing debate over the previous NFC and AFC champs and the players who’d make the best draft picks for the fall season. Everyone grinned, talked, munched. She took a big bite of manicotti.

“So, Elizabeth,” the family matriarch said loudly, “don’t you think my son should get married soon?”

Thanks for sharing your excerpt, Marilyn!

To find out more about Marilyn and her books visit her website.

Don’t forget to comment below and be in the running for some great prizes as part of my Mouthwatering May special event!