I’m so excited to share that 3 of my romcom stories have been bundled together into one magical collection, all for the price of one ebook!

My new Romantic Comedy Collection is now available in ebook to buy or gift to a friend. It includes the following stories: 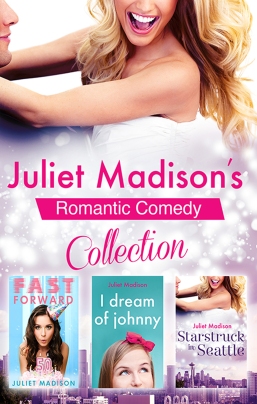 Aspiring supermodel Kelli Crawford seems destined to marry her hotshot boyfriend, but on her twenty-fifth birthday she wakes in the future as a fifty-year-old suburban housewife married to the now middle-aged high school nerd. Trapped in the opposite life of the one she wanted, Kelli is forced to re-evaluate her life and discover what is really important to her. Will she overcome the hilarious and heartbreaking challenges presented to her and get back to the body of her younger self?

I DREAM OF JOHNNY

Getting three wishes isn’t all it’s cracked up to be when an unfortunate spelling error in Mandy’s high-tech magic lamp changes her wish for a Greek God to a Geek God. Before Mandy can request a replacement wish, she has to put up with him for twenty four hours, and the timing couldn’t be worse — it’s her friend’s wedding day, her ex will be there, and the God of Geeks insists on coming along for the ride!

Aspiring actress Anna Hilford might only have a small role in a leading television drama, but she longs to be dreamboat Karl Drake’s leading lady. Sick of being loveless and overlooked, Anna seeks the help of the love coach, Lulu, from LuluTheLoveAngel.com but fate has different ideas: Lulu has undisclosed power, and Anna is about to realise that life happens while you’re busy making plans…

Thanks to Escape Publishing for putting this together, and thanks to my loyal readers who have supported my books. 🙂

You can buy it from all online ebook retailers, here are the main links, if your preferred store is not listed you can find all other links on the Escape page by clicking the buy now button on that page.

>> And, to WIN a signed tote bag featuring the book cover and filled with swag and surprise goodies, head over to my Facebook group, join (if not already a member), and comment on the giveaway post! Winner drawn April 29. Open worldwide.

THE DELTA GIRLS are coming… (plus a giveaway)

In less than 3 months my brand new Young Adult paranormal series, THE DELTA GIRLS, will be launched!

Beginning with SIGHT, the series follows five sisters who can each glimpse the future with one of the five senses. Each instalment will be released three months apart (following SIGHT on July 14 will be SOUND, SCENT, TASTE, and TOUCH). The series is published by Diversion Books and will be available in both ebook and paperback.

“I spent my birthday fast asleep. In a coma to be exact.”

When Savannah wakes up after two months in the hospital, she sees a whole lot more than expected, things that could put those close to her at risk.

The five Delcarta sisters have never believed in the paranormal, not like their woo-woo mother. Instead they believe in the power of sisterhood, of romance, and rebuilding their lives after their father’s mysterious disappearance nine years earlier. Starting anew in the small town of Iris Harbor, they see potential in all.

But Savannah’s awakening after having surgery on a life-threatening aneurysm brings a unique ability to the Delcarta sisters–together, each can predict the future with one of the five senses. And Savannah has the gift of sight.

A serial arsonist has been terrorizing the tight-knit community, and the Delcarta sisters have their suspicions on who could be to blame, including a boy who starts as an adversary to Savannah and then very quickly becomes her whole world. Investigating these crimes, trying to stop them before the next flame is sparked will call upon Savannah to use her newfound abilities with the help of her sisters, and will put each of their lives in danger.

This stunning new paranormal series blends the sweetest of romances with breathless suspense, and introduces five young women who share a haunted past, an extraordinary gift, and an uncertain future.

I’m celebrating the upcoming release of THE DELTA GIRLS with a worldwide GIVEAWAY of a selection of awesome YA books!

**First of all, if you’re in the USA you can also enter to win a paperback copy of SIGHT via Goodreads HERE.

Enter va the Rafflecopter link below to win one of the following paperback books (there will be 4 winners in total):

1. GRIM – a collection of unique fairytale retellings by authors such as Amanda Hocking and Julie Kagawa.

2. LET’S GET LOST by Adi Alsaid

4. THE QUEEN’S CHOICE by Cayla Kluver

*Each book prize will also include a selection of signed Delta Girls swag!

Comp closes April 29 and winners will be notified via email. Winner must provide postal address within one week of notification or another winner will be chosen. Books are suitable for teenage audiences and older.