← A Monday Morning Surprise – I’m a Finalist!
My To-Be-Read Pile – so many books, so little time →

At Home With Lee Christine…

To celebrate the release of THE JANUARY WISH, the first book in my small coastal town series set in Tarrin’s Bay; The Town of New Beginnings, I’m hosting a new interview segment called ‘At Home With…’

Today, we’re paying a visit to romantic suspense author, Lee Christine, whose new release IN SAFE ARMS has just been released too, in follow up to her first release, IN SAFE HANDS. 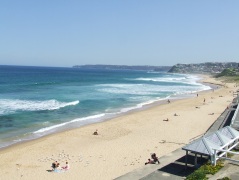 1. Hi Lee, where are you from and how long have you lived there?

Hi Juliet. Thanks for having me on your blog today. I live in Newcastle, New South Wales, and have lived here all my life, except for a stint in Sydney years ago.

2. What do you love about the place you call home?

I love the natural beauty of our beaches and Lake Macquarie. I also love our working harbour. Someone once said ‘there’s something honest about a working harbour’. I agree with that.

3. Do you have a favourite local cafe, restaurant, bar, club, business, or store? Give them a plug here!

My favourite store is Scentsation at The Junction. It’s owned by my friend Michelle Rainey, and she has the most exquisite taste in clothes, jewellery, handbags and perfume.  If I’m trying to save money I don’t go in for a while because there’s always something to tempt me.

[Juliet ~ Sounds scentsational! I’ll pay a visit if I’m ever in Newcastle 🙂 ]

4. Do you have any pets? If so, what are their names? (Feel free to share a photo)

I don’t have a pet at the moment 😦 . My last dog was a mini Schnauzer called ‘Shaq’. My daughter was into the NBA at the time and named him after Shaq O’Neill. We had him for eleven years and he was such a wonderful dog, I’m afraid if I get another one, I’ll be disappointed. He’s spoiled me for all others I’m afraid.

5. What is your favourite room in the house and why?

I love our family room at the back of the house. It’s where we live, where we’ve had many great days and nights laughing and eating and being together.

6. If you had to evacuate your house, what three items (apart from people and pets!) would you take?

Old photograph albums. Hanging frames with family photographs in them, and the computers, again because of the photographs. You can’t replace those memories.

7. If you had a magic wand, what’s one thing you would change about your home or your town?

I really need to demolish the bathroom and update it, but with my two children studying overseas, buying airline tickets takes priority over a new bathroom at the moment.

8. It’s movie night at your place, the popcorn’s out, and everyone’s nabbed their favourite couch corner or armchair… what movie/s will we watch?

If the boys are with us, we’d be watching something funny like Death at a Funeral or Ted. If it’s just my daughter and myself, then it’s definitely Emma.

9. Imagine you have the luxury of a chef for a night and you’ve invited people over for a dinner party, what would you have the chef cook?

[Juliet ~ A bit of everything for dessert, sounds good to me!]

10. Name three books on your To Be Read bookshelf or e-reader:

Watching You by Michael Robotham

The Light Between Oceans by M.L. Stedman

11. Name something unique or uncommon that you have in your pantry or fridge:

Cocoa with Mickey Mouse on the front from Disneyland.

12. If you could live anywhere for one year, where would you go?

Balestrand in Norway. I’ve been there once. A whole host of famous people have stayed there over the years like Eric Clapton and Yoko Ono. It’s so quiet and peaceful right there on the Fiord. I think I could write a great book there. Well…maybe!

13. You’ve just received a phone call from a friend or relative, and they’ll be arriving in five minutes for a visit. What do you do?

a) Relax on the couch until they arrive.

b) Put the kettle on; place some (probably homemade) snacks onto a tray; set the table; put flowers into a vase; and light a candle (and maybe even make some place cards with your super calligraphy skills).

c) Put the kettle on; tip out a few cookies onto a plate; check your reflection in the mirror, and wait.

d) Freak out; shove excess household clutter under beds, in cupboards, drawers, and the garage; trip over something in the process; hold an ice pack to your bruised forehead while swearing profusely; check the mirror to see if you’re still in pyjamas; frantically change into suitable clothing whilst simultaneously holding ice pack to your head; fall over again; alternate ice pack between head and location of new injury; then shove ice pack under bed and greet visitors with the fakest smile of pure calm you can muster.

Definitely (d). I’m not a fan of impromptu visits. Well, give me at least twenty minutes notice.

> Even though Lee would probably love you to pay a visit, why not visit her online right now?

> And help her pay for that in-house chef (or housekeeper) by buying a copy of her books here:

Amazon, or other retailers via links at Escape Publishing.

Threatened with the publication of naked photographs taken in her law student days, defence attorney Allegra Greenwood enlists the help of former SAS Commander Luke Neilson, unaware of his involvement in her brother’s death in Afghanistan.
In a race to stop the photographs appearing on the Internet, Luke battles a hidden enemy, his growing feelings for Allegra, and his conscience, which demands he protect a fallen comrade’s sister. As the stakes increase and more sinister motives unfold, Luke not only has to fight to save her career, he has to fight to save her life.

Amazon, or other retailers via links at Escape Publishing.

Legal secretary Josephine Valenti has no idea why a notorious bikie president would be contacting her, but when he is murdered in front of her eyes, she knows that she is in very deep trouble. Fleeing to her home, she’s intercepted by Nate Hunter, a man she used to know and lust after…a man she used to care about. However, Nate has changed. His leathers and his bike tell of a lifestyle that Josie can’t begin to accept or understand. His is a life of drugs, money laundering and prostitution. Though, all is not what it seems, and Josie must fight harder than she ever has before — for the truth, for what’s right, and, ultimately for the man who still has a hold of her heart.

← A Monday Morning Surprise – I’m a Finalist!
My To-Be-Read Pile – so many books, so little time →