In January 2011 I moved into a new house, in a new town, to start a new life. Somehow, I started a new book too! This book was The January Wish, set in my new town but with a fictional name. And exactly two years later (January 17th, 2013) I got an email with an offer of publication! Yes, I am excited to finally announce that I’ve signed my second publishing contract with Escape Publishing, the digital imprint of Harlequin Australia.

So now, two wishes have come true… my wish to have this story published, and my character Sylvia’s wish to… well, read the blurb to give you an idea 😉 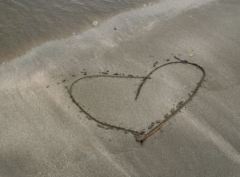 When control-freak doctor, Sylvia Greene, makes an impromptu wish at the Tarrin’s Bay Wishing Festival, she doesn’t expect it to come true, but a week later her ordered life is thrown into chaos when the daughter she secretly gave up for adoption at sixteen turns up in town. While dealing with deeply entrenched guilt, small town gossip, and a burgeoning attraction for her emotionally unavailable colleague, she discovers her daughter harbors a secret that could threaten to tear them apart once again.

The genre of this story sits on the border between contemporary romance and women’s fiction, although it will probably be put into the contemporary romance slot because although the story has themes of motherhood, career, and friendships, tying the whole story together is an emotional romance that I hope will have readers aching for the hero and heroine to be together.

The January Wish is the first book in my proposed ‘Tarrin’s Bay’ series, with each book being a stand-alone story but set in the same town with some familiar characters appearing in each book. Each book is also named after one of the calendar months, and I’ll be working on the second book, February or Forever, later this year which I’m really excited about as I’ve been plotting it for months! I’m also creating a ‘Tarrin’s Bay’ website to help bring the town to life for readers. Tarrin’s Bay is called ‘The Town of New Beginnings’ – it’s where people go for a holiday to find they never want to leave. There are beautiful beaches set against a backdrop of lush green rural land, a close-knit community, friendly people, quaint shops – including an old fashioned bookshop, and an historic wishing fountain in the town’s popular meeting spot – Miracle Park.

What makes this book unique is that it has three points of view – the hero, the heroine, and an eighteen year old girl, with each of their lives and stories being linked to each other’s. There’ll be laughter, there’ll be tears, and there’ll be secrets revealed.

Last year, The January Wish was one of the six finalists in the Choc Lit Search for an Australian Star contest, and I was completely gobsmacked when I found out! Although I didn’t win, it gave me confidence that readers might enjoy this story, and I can’t wait to share it with you on 1st December 2013. It was going to be released in January to tie in with the title, but by releasing in December instead it allows time to build up some excitement around the upcoming new year, which is what starts off the story – at the Tarrin’s Bay annual Wishing Festival in January.

The coin in Sylvia’s pocket cooled her warm fingers as she fiddled with it impatiently. At least this was all for charity. That would be her excuse if anyone asked why she – Dr. Sylvia Greene – sceptic and all round party-pooper, was making a wish. She had a great life; an interesting career, a best friend, good health, a nice house, and even a new boyfriend. What else could she possibly wish for? What was she doing here?

To see some pictures I’ve collected that give you a feel for the story, have a look at my Pinterest page for The January Wish here.

To keep updated on this book and the Tarrin’s Bay series, you can subscribe to my blog by filling in your email address at the top right corner of this page (if you’re on a smartphone, click ‘view full site’ at the bottom, then go to the subscribe form). I look forward to bringing you interesting articles and posts about this upcoming book and series in the lead up to it’s release!

Have you ever made a wish that came true? 😉