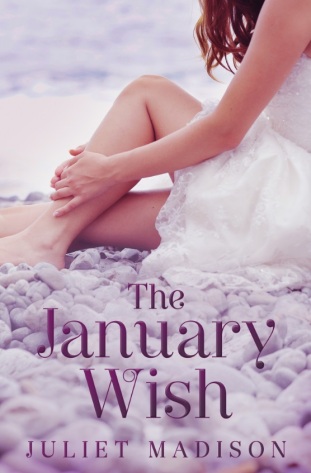 Ta da! What do you think? It’s amazing to finally see this story come to life as it’s been a long road to publication for this one. I think the cover really suits the feeling and emotion of the story, and hints at the secrets hiding behind the characters and this small coastal town.

Thanks to the team at Harlequin Australia / Escape Publishing for another fab cover!

The January Wish will release on 1st January 2014 and kickstarts my Tarrin’s Bay Series, and the good news is you won’t have to wait long for the second installment – February or Forever releases a month later, on 1st February! Yep, I’ve been hard at work making sure I could have the second one ready for readers right away 😉

So what is The January Wish about? It’s a sweet, emotional romance about the pleasures of making a wish and seeing it come true. It’s a blend of contemporary romance and women’s fiction, perfect for fans of Susan Wiggs and Sherryl Woods. This story is unique in that it is told in three points of view, one of which belongs to an eighteen-year-old girl whose journey and romance of her own make this a New Adult (NA) and Adult story in one! It’s also a small town romance, a coastal romance, and a medical romance (just to cover all bases, you know?) 😉

This book was the second book I ever wrote, and went through lots of revisions to make it the best it could be, and I was thrilled when it was announced one of the six finalists in the Choc Lit Publishing Search for an Australian Star contest in 2012.

The setting of the story, Tarrin’s Bay, is based closely on the town I live in on the South Coast of NSW, Australia, so I hope I’ve captured the heart and soul of this special place on the page for reader’s to enjoy… Tarrin’s Bay is known as The Town of New Beginnings.

If you’d like to see some pictorial inspiration for The January Wish, you can visit my Pinterest board here. And add it to your Goodreads shelf here!

So until January 1st… I hope your wishes come true 🙂