As a digitally published author, I am excited to announce that one of my books, THE JANUARY WISH, will be put into print as part of a limited edition compilation of 3 Australian coastal bestsellers! This will be my first print release. 🙂 🙂

The book is called TIME FOR THE BEACH, and will be officially released on 1st January 2015 but should be in stores about a week before Christmas, making a perfect Christmas gift! This is an Australian release published by Harlequin Australia and will be available in BigW stores and Target. If you see it in the wild please take a photo for me!

Here is the summery cover! 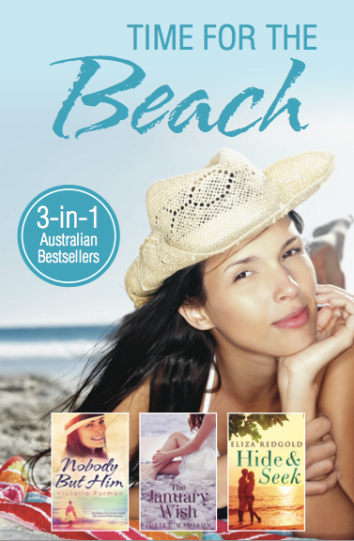 And here is what each story is about:

NOBODY BUT HIM by Victoria Purman

She didn’t expect to run into her first love… or to fall back in love with him! At eighteen, Julia Jones left for the city with a head full of grand plans for an exciting life that certainly didn’t include her home town of Middle Point – a main street with a pub – or Ryan Blackburn.

But fifteen years – and a lifetime later – she’s forced to put her big city life on hold when she heads home to finalise her mother’s estate. Which is where she runs smack bang into the town’s new champion… the same Ryan Blackburn. The sensible thing to do? Stay the hell away from him and head back to Melbourne as fast as her stilettos can carry her. But Julia finds his offer of a helping hand and a hot body too delicious to refuse and dives into a reckless, one-time fling. What she doesn’t realise is that tomorrow has a way of sneaking up, and that saying goodbye to her home town – and to Ryan – is much harder the second time around.

THE JANUARY WISH by Juliet Madison

He thought he knew all there was to know about the birds and the bees, but he’s about to get schooled.

A little birdie tells Hope Buchanan that American hotel developer Sullivan O’Dare isn’t just in town for a holiday. As the manager of Hot Tropics Bird Sanctuary, Hope has more than a vested interest in protecting natural habitats.

Hope pulls out all the stops to convince Sullivan to come out with her to the WA bush, with its beautiful trees and unique wildlife. Surely the stunning scenery and a dose of ‘Broome time’ will show him what is at stake.  But what is initially about saving the Sanctuary soon becomes about finding a connection. Could it be that Hope has finally found the bird of a feather to form her own flock?

Maybe you’d like to add TIME FOR THE BEACH to your Christmas wish list, and I’m sure you have some friends or family members who would love to receive a gift of three beach reads in their Christmas stocking! Remember, it will be a limited edition release so once they’re sold out they’re sold out, so get in quick before Christmas or early in the new year!

Big thanks to Harlequin Australia for putting this together, I can’t wait to see it on the shelves! 🙂

*The January Wish is the first book in my loosely linked Tarrin’s Bays series. February or Forever is also available as an ebook, and Miracle in March will be releasing in March 2015.